In 2019, Microsoft signed a 10-year agreement with Reliance to operate the data centers of the oil-to-telecoms conglomerate with its Azure cloud 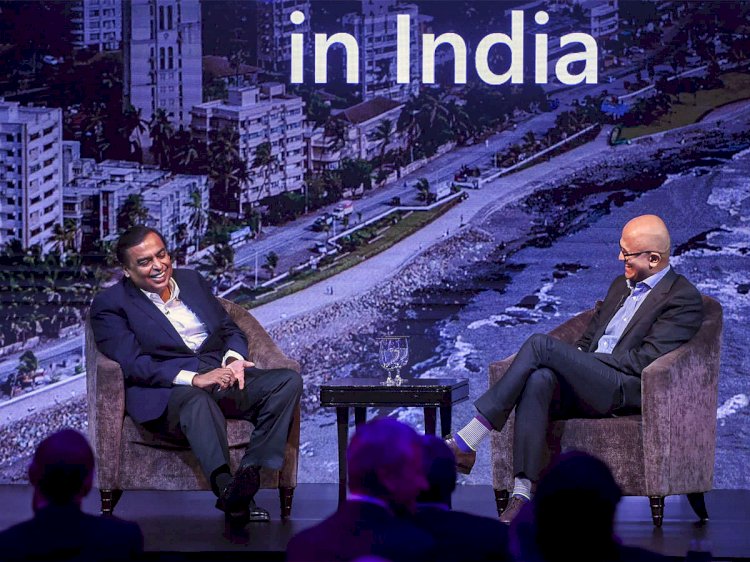 On 24 February 2020, Microsoft Corporation CEO Satya Nadella lauded the company's cloud alliance with Reliance Industries when sharing the stage with its CEO and President Mukesh Ambani. In 2019, Microsoft signed a 10-year contract with Reliance, agreeing to fuel the Azure cloud's data centers.

Nadella said at an event in Mumbai, India, where he started his three-day tour of India, that "we worked with Reliance throughout the stack, everything from what they're going to do with Azure in their own data centers and how they're going to expand it. It's a great example of a business leader and an organization that has platform solutions in very different fields, using technology to create more products."

Mukesh Ambani said, that "we are very eager about the association that is going to have between Microsoft and Reliance Jio, and also, I think that it will be an important alliance when we look at this epoch. I can easily say that India's mobile networks are now outstanding and on a par with anywhere else across the globe. It is much likely that India certainly has a chance to become the world's leading digital culture."

Earlier during a keynote speech, Nadella urged Indian business leaders to develop comprehensive technology capabilities in nature. Nadella said that "Indian CEOs need to develop their tech capabilities and to make sure the solutions are inclusive."

Stating that the aggregators have emerged in the last decade, Nadella believed aggregators are not sufficient alone. "We need to make sure digital initiatives contribute to efficiency expanding." Nadella's speech focused heavily on the path forward to technology and was packed with real-life examples of Microsoft's collaboration with Indian firms.

Addressing the CEOs, Nadella said, "As you develop tech muscle, you have also had to recall how you're doing with the digital skill that drives greater inclusive economic development?" He further added that in a multiconstituent realm, "stakeholder capitalism" is essential. Leaders need to be prepared to react as quickly as possible to technological up-gradation, thus developing the tech capability.

Apple and Johnson & Johnson are collaborating on a new study to see whether Apple...

CES 2021: The tech expo swaps Vegas for a virtual show

Neobanking as a space already has incumbents such as Niyo which has a tie up with...

Adani group would contribute Rs 10,700 billion to the expansion...

Ford comes up with F-150 Lightning name for its new electric...

Ford Motor’s future electric vehicle F-150 truck is expected to come out with a...

OPEC and its allies to stick to their plan on oil production...

OPEC and allied oil producing nations have stated that they are agreeing to continue...

India robotic vacuum cleaner market is growing at a high CAGR because of the adoption...

Electric Farm Tractor Market is flourishing because electric is considered an alternative...

Trade between Japan and South Korea to face more restrictions...

A simmering conflict between Japan and South Korea is expected to cause further...

Hyundai: The carmaker aiming to become a tech firm

Hyundai let it slip last month that it was in talks with the iPhone maker to partner...